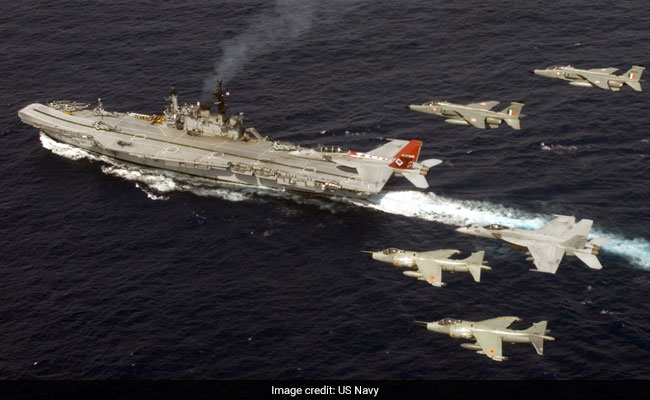 In a letter to the Defence Ministry, Shiv Sena MP Priyanka Chaturvedi has mentioned the Maharashtra authorities is “happy to cooperate in restoring and preserving the historical ship” INS Viraat, which served as India’s plane service.

“It was with great sadness and concern [that] I read that the scrapping of the historic INS Viraat has been initiated at Alang in Gujarat,” Ms Chaturvedi mentioned.

The letter, which asks the Defence Ministry for a no-objection certificates to protect Viraat, comes at a time when the decommissioned warship is being pulled ashore by a ship-breaker in Alang earlier than it’s destroyed for scrap.

Envitech, the non-public agency that desires to accumulate the warship and convert it right into a maritime museum off Goa, approached the Supreme Court at present after it turned obvious the NOC wouldn’t be coming from the Defence Ministry, though the ship had been bought to Shree Ram shipbreakers in Alang for Rs 35.eight crore.

The chairman of Shree Ram shipbreakers, Mukesh Patel, refuses to half with the ship with no authorities NOC.

“If there is a [government sanctioned] no-objection certificate and they [Envitech] send full payment in one shot, then it is possible,” Mukesh Patel instructed NDTV yesterday. The full fee for the ship is anticipated to be within the vary of Rs 110 crore.

In the letter addressed to Defence Minister Rajnath Singh at present, Ms Chaturvedi mentioned, “We as a nation must use our decommissioned naval ships to help citizens to better understand the significance of India’s maritime history.”

“It saddens me further to note that though there is an offer to convert the warship into a maritime museum, it awaits a no-objection certificate from the Ministry of Defence for transfer of the warship,” she mentioned.

In a sequence of experiences, NDTV has highlighted the plight of Viraat, the decommissioned Indian Navy warship which was India’s flagship for a number of many years and got here to outline India’s maritime energy.

Before being commissioned into the Indian Navy in 1986, Viraat served as HMS Hermes within the Royal Navy the place she fought with distinction within the Falkland Islands struggle in 1982 within the south Atlantic.